Registered during the 3rd session of the General Assembly of the BIE on 27 October 1932, the first World Expo organised under the auspices of the BIE took place in Brussels between 27 April and 3 November 1935. Held under the theme of “Transport”, World Expo 1935 Brussels celebrated the 100th anniversary of the first railway line in continental Europe, connecting Brussels and Mechelen. 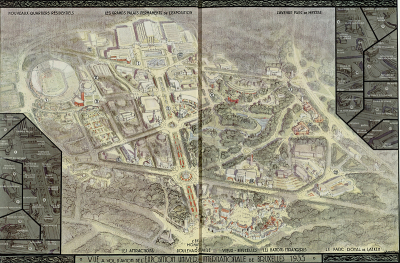 From the celebration of the Centenary to the World Expo

With the Parc du Cinquantenaire becoming too cramped, the city of Brussels acquired new land from the Royal Laeken Castle with the aim of building a new exhibition complex and celebrating the 100th anniversary of the country’s independence in 1930. However, Liege and Antwerp also sought to mark this anniversary by hosting exhibitions in the same year. An agreement was reached whereby these two cities would hold centenary events, while Brussels would host a World Expo in 1935. In a context of economic crisis, the project created optimism and generated employment opportunities, with Expo Director Charles Fonk stating “Belgium wanted to offer a place for a worried world to find its bearings”.

The Jubilee Stadium (now known as the King Baudoin Stadium), which opened on 23 August 1930, was the first structure to be built in the new district, known as the Heysel Plateau. The planning of the Expo site was then overseen by Joseph van Neck, with the site being transformed from undulating terrain to a 152-hectare plateau, requiring the removal of 700,000 m3 of earth.

Five Exhibition Palaces were built as permanent trade fair venues, comprising today’s Palais Nº 2, 3, 5, 6 and 10. Infrastructure and transport facilities including bridges, tramways and a railway station were also built to make the Heysel Plateau an easily-accessible hub, and the site was embellished with ponds, fountains and gardens, incorporating the 17 ha Osseghem park.

A technical and architectural triumph

The Exhibition Palaces and notably the Halle Centrale were the most recognisable symbols of the Expo, showcasing the latest techniques in design and construction. Standing 31 metres high and 150 metres long, the Halle Centrale (Palais Nº 5) was entirely built from reinforced concrete, supported by parabolic arches spanning 86 metres without any intermediary supports, thus creating an expansive, column-free exhibition area. Requiring 11,200 m3 of reinforced concrete, the structure was built in a short timeframe using the most modern technologies, showcasing the possibilities of this new type of construction to the global public.

The Halle Centrale was dedicated to Transport, the theme of the Expo, with its façade featuring four statues paying tribute to sailing, horse-drawn transport, steam power, and aviation. It was the principal exhibition area of the Exhibition Palaces, which also included the Palace of Art and the banquet hall.

A popular and urban success story

The Expo site featured several hundred pavilions, including those from international participants (with France’s participation alone comprising five pavilions), a church in the form of the Catholic Life Pavilion by Henry Lacoste, a planetarium known as the Alberteum (the precursor to the Brussels Planetarium), as well as ‘Old Brussels’ – a stucco reconstruction of the city from the 17th and 18th centuries.

The Expo also included 300 conferences as well as an array of performances and activities. By the time it closed, the Expo had gathered more than 20 million visitors – equivalent to two-and-a-half times Belgium’s population at the time – and had generated a profit of 45 million Belgian francs.

In troubled economic times, the development of the Heysel Plateau and its infrastrucutre was a bold project that created job opportunities and created a major new exhibition complex. Expo 1935 played a significant role in the urban expansion of Brussels and paved the way for the development of Laeken and what would later become the site of World Expo 1958.