Following in the footsteps of Expo 1888, the International Exhibition of Barcelona 1929 was the second World Expo to be held in the city. The Expo, which had ‘Industry, Art and Sport’ as its theme, attracted almost 5.8 million visitors and thoroughly revitalised the modern spirit of the regional capital. A total of 29 nations participated in the Expo, while there were also private (non-official) participants from other countries including the United States and Japan.

Plans for holding a second International Exhibition in Barcelona originated as early as 1905, when Catalan architect and political activist Josep Puig i Cadafalch published an article in ‘La Veu de Catalunya’, demanding a new wave of modernisation for the city. Inspired by the 1888 Exhibition, he called for Barcelona to host another World Expo. 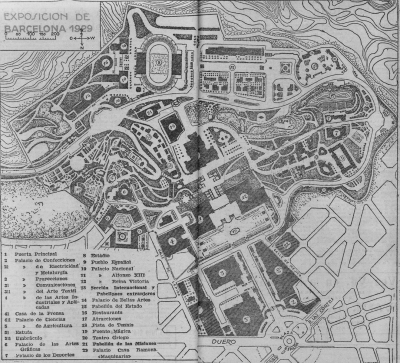 By the official inauguration of the Expo on 19 May, the city of Barcelona had been thoroughly modernised and many districts had undergone large-scale renovations. The famous Barri Gòtic (Gothic Quarter) was redeveloped, while Spanish avant-garde artists such as Pablo Gargallo, Josep Clarà, and Josep Llimona completed the Plaça de Catalunya with a collection of statues.

The town of Sarrià, which became Barcelona’s new uptown area in 1921, was connected to the central Eixample neighbourhood via an underground railway.
Barcelona’s França railway station was re-built for the Expo; its two monumental buildings were designed by the architect Pedro Muguruza and inaugurated by King Alfonso XIII. Additionally, modern tarred roads were laid and lit by modern street lights, and the first metro lines entered into service.

One of the greatest challenges in planning the Expo was to find a large enough site – over 100 hectares – to host all of the pavilions and exhibitions spaces. Monjuïc, a park overlooking the city’s harbour, was eventually chosen, with the city of Barcelona gaining control of the site from the military. The park was unusual for an Expo site due to it being on a slope, making Expo 1929 the first of its kind to be held on a non-flat surface.

The initial development of the site started in 1917 and lasted until 1923. Several farms on the site were transformed into gardens by French architect, Jean-Claude Nicolas Forestier. Additionally, the Alfonso XIII and Victoria Eugenia Palaces were built on the Expo grounds according to the designs of Josep Puig i Cadafalch.
Between 1927 and 1929, the other exhibition buildings and pavilions were constructed or extended, including some by famous architects such as A. Font and E. Saigner. Nicolau M. Rubió designed the hotels located on Plaça Espanya, located in front of the main access to the Expo site. The Poble Espanyol (Spanish Town) was built on Montjuïc as a museum to Spanish architecture, featuring 117 buildings inspired by the country’s regional styles.

The centrepiece of the Expo site and the largest building constructed for the Expo was the Palau Nacional, designed in a Spanish Renaissance style by Eugeonia Cendoya and Enric Catà.

Expo 1929 attracted 5.8 million visitors from all over the world. Among the most popular features of the exhibition was the ‘Juego de Agua y Luz’ fountain, designed by Carles Buigas. The monumental fountain stood out with its multiple water jets illuminated with changing colours, matching the different figures created by the water.

Culture and leisure played a big part of Expo 1929, with activities including theatre shows, concerts, operas and ballets. The old stone quarries of Montjuïc were used to build a Classical Greek Theatre, while visitors could also enjoy light entertainment in a funfair park.

A number of sporting events were organised as part of the Expo, with the site including tennis courts, a swimming pool and a specially built stadium, which hosted athletic competitions and football games.

In addition to the improvements to Barcelona’s infrastructure and urban development, several structures were kept at the end of the Expo for recreational and cultural uses. Many of these buildings are magnificent examples of 20th century architectural styles, including classicism, modernism and avant-garde.

The Palau Nacional now hosts the Museo Nacional de Arte de Cataluña (MNAC), and the Montjuic Stadium, built for the Expo’s sports events, was later renovated for the 1992 Olympics.

The Palace of Graphic Arts was later turned into the Catalan Archaeological Museum, while the Palace of Agriculture became the Mercat de les Flors (Flower Market). Additionally, the Feria de Muestra de Barcelona, a major venue for concerts, markets and cultural events, was created from three of the Expo’s pavilions. The Poble Espanyol and the Greek Theatre also still remain and are some of Barcelona’s most popular attractions.

The German Pavilion, designed by architect Mies van der Rohe, was an important architectural feature of the Expo. Built with glass, travertine and different kinds of marble, it was demolished after Expo closed. An early symbol of the Modernist movement, the pavilion received much attention and interpretation by successive generations of architects and was therefore rebuilt between 1983 and 1986 as a tribute to its iconic status.