In 1906, in order to celebrate the inauguration of the Simplon Tunnel, Milan held its first World Expo. For contemporaries, the Simplon Tunnel was an engineering achievement and a concrete example of the possibilities of applying science to work. The latter progressively became the central theme of the Milan Expo, going well beyond the original reference to transport.

The Expo was located in two venues simultaneously, some 1,350 metres apart, the Parco Sempione and the former Piazza d'Armi. The transfer of visitors between each venue was assured by an innovative raised electric railway, while on Piazza d'Armi, the links between the pavilions was made possible via an innovative Fiat petro-powered tramway, both innovative attractions facilitating the transport of visitors on the site. 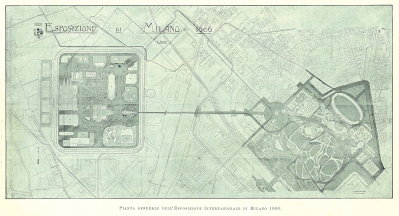 Train and car engineering as well as aeronautics and maritime transport were part of the highlights of the Expo. Milan Expo hosted a dedicated Motor Car building, probably the first at a World Expo, and a special parade of automobiles on May 26 in conjunction with an international congress on the automobile and the conclusion of the Coup d'Or race. Railway tracks occupied 20km of the Piazza d'Armi and enclosed spaces were developed to display signals, communication systems and other railway equipment as well as the use of electricity to power the railway systems. Prototypes of aircraft were also on displayed, all celebrating the idea of progress.

In the Parco Real, Pavilions exhibited furniture, tapestries, paintings but also clothes, fabric and accessories made from Silk and manufactured by over 2,000 companies. In a manner typical to World Expos, all the phases from the silkworm to the production of the fabric were for example displayed in a 2,000 m2 pavilion dedicated to the Italian Silk industry.

The Expo also included numerous light-hearted attractions from fairground rides and air balloons to the cinema (only invented 10 years before the Expo).

Most of the 200 temporary buildings were made of wood, metal, glass and plaster. A fire completely destroyed on 3 August, the joint Hungarian and Italian art building. The only building which can still be admired today is the Civic Aquarium, true symbol of local Art Nouveau architecture. During the Second World War, it was hit by a bomb in the night of the 13/14th August 1943 and was reopened only 20 years later, in 1963. Today, it hosts the hydro-biological section of the Natural History Museum.