Theme
Celebration of the centennial of the Louisiana Purchase

Celebrating the 100th anniversary of the Louisiana Purchase

Expo 1904 in St. Louis was known as the Louisiana Purchase Exposition as it celebrated the 100th anniversary of the American purchase of the territory of Louisiana on 30 April 1803 from France. The Expo stretched from Forest Park to the west of St. Louis over an area of 500 hectares, making it one of the three largest World Expos ever organised.

The opening of the Expo was delayed by one year to allow for final preparations, with the site finally opening to the public on 30 April 1904. This delay also allowed more time to attract international participants, with a total of 60 countries having a presence, including China’s first formal participation in a World Expo.

The Expo site was so large that it took visitors an entire week to see all of it: 1,500 buildings were erected around the site and 75 km of walkways and railways were laid to move around the site. To encourage visits from further afield, reasonable train prices were made available, and city’s hotel and accommodation facilities were improved so that it had the largest capacity in the United States for the period of the Expo. 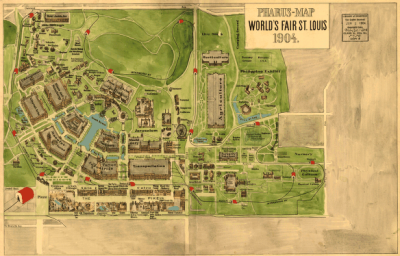 The Pike was a 2km section of the Expo that contained all the amusements, with the aim of informing, surprising and entertaining visitors. For example, visitors could visit a replica of a Paris fashion show, view a re-enactment of the Galveston Flood, or submerge themselves in the scenery of Constantinople and Cairo. Foreign pavilions were designed to replicate well-known monuments from their country, with the French pavilion being a replica of the Trianon at Versailles.

The Texas pavilion was one of the most impressive buildings of the Expo: it was shaped like a five pointed star topped by a dome to symbolise the state of Texas. The pavilion’s entrance was reached by an 8-metre flight of stairs, with enormous columns and porches at the corners of the star.

The Festival Hall was another staple of the Expo in St. Louis, featuring the largest dome in the world at the time. The building featured three water cascades draining into the Fountain of Liberty, which was adorned with statues personifying Liberty (the largest of the statues), Genius and Inspiration.

The Palace of Agriculture was the Expo’s largest building, and is remembered for its unusual monuments made out of edible products, like the Louisiana statue made of sugar, a statue of President Roosevelt made entirely of butter and an almost six-metre high lighthouse made of salt. Agricultural resources of each state were shown on a map covering two hectares and presented the crops growing in each state of the nation to visitors.

Showcasing the theme of human progress

The three main scientific achievements that were showcased at Expo 1904 - automobiles, wireless technology and aeronautics - were exhibited in white palaces dubbed “the Ivory City”. One very popular exhibit in this section was the De Forest Wireless Telegraph Tower, where visitors queued up to send wireless telegraph messages to Chicago.

Visitors could also follow the competition for the best aeronautic achievement to date, which took place on the 5-hectare aeronautic field, and featured balloons, kites, planes, a gliding machine, and airships.

Although the St. Louis Expo did not reach its target of 30 million visitors, the organisers were satisfied by the final tally of 19 million. As the majority of the pavilions were built to be temporary, few legacies remain today. However, the Palace of Visual Arts still stands in its place, and now serves as the Museum of Arts of St. Louis, one of the largest arts museum in the United States.