Belgium hosted its first ever World Expo in Brussels between 10 May and 8 November 1897, organised under the theme ‘Modern Life’.

The Brussels Expo was held in the Parc du Cinquantenaire, which dated from 1875 when it replaced a large military training ground. The Expo site was host to pavilions from 26 nations and Belgium’s provinces, and the various themed galleries showcased the works of 10,668 exhibitors. 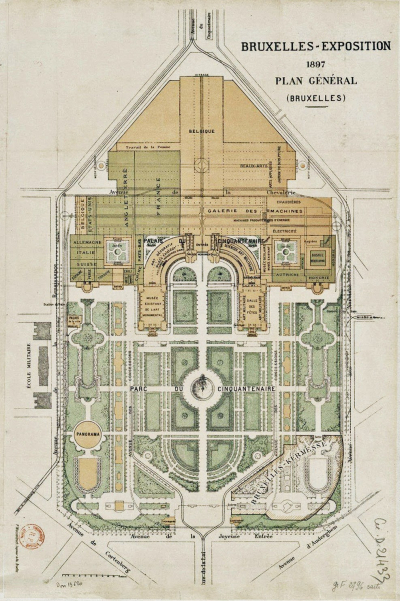 The ‘Machine Gallery’ for instance, showcased the latest technological innovations of the time, including boilers, electric converters and ventilation systems, while other sections were dedicated to the social economy or hygiene.

Belgium’s main cities each had their own respective pavilions. The city of Brussels was represented by a late Gothic style pavilion designed by Paul Saintenoy. It notably included reproductions of the capital’s three most famous statues; ‘Maneken Pis’, ‘le Cracheur’ and ‘les Trois Pucelles’.

The Parc du Cinquantenaire featured several entertainment venues and amusements, including the Brussels-Kermesse (Brussels Fair), which was designed by Jules Barbier and featured a reproduction of the city centre in the 14th century. Featuring actors in period costumes, art installations, shooting ranges, games and plays, the Kermesse had all the atmosphere of Brussels in the Middle Ages.

A wooden arch was erected to mark the centre point of the Parc de Cinquantenaire; this arch was later replaced by the triple-stone Arcade du Cinquantenaire, built in 1905.

The technological innovations section of the fair was also very popular among the visitors to the Expo. The section notably contained an ‘Electric Sun’ with 4,500 light bulbs, as well as the ‘Zoographic Room’, one of the early precursors to the modern cinema.

As a display of its colonial strength, Belgium also organised a separate ‘Colonial Exhibition’ in Tervuren, centred around the Belgian Congo and located 15km from the Expo site. To link the two exhibition grounds, a tram line and the Avenue de Tervuren were built.

Showcasing Belgian modernity, Expo 1897 was a milestone of the Art Nouveau Movement. The Expo’s advertising poster, designed by Henri Privat-Livemont in his typical Art Nouveau style, became symbolic of the event as a whole.

The ‘Temple of Human Passions’, also known as the Horta-Lambeaux Pavilion, was built for the Expo. It was the first building to be commissioned to Victor Horta, the young Belgian architect who would go on to become a pioneer of Art Nouveau. Initially meant to coincide with the opening of the Expo, its inauguration was delayed due to a disagreement between the sculptor and the architect.

Transpiring a sense of Art Nouveau, the works of the Expo 1897 influenced the movement far beyond the borders of Belgium. The Austrian architect Otto Wagner, was deeply influenced by the early Belgian Art Nouveau scene when he visited the Expo, especially the geometric style of Paul Hankar. This, in turn, played a role in the development of the ‘Viennese Secession’ aesthetic.

Expo 1897 was thus the expression of a new art form, on the eve of the 20th Century, which spread its aesthetic around the world.

Attracting over six million visitors, the city’s rail and street infrastructure was vastly expanded for the World Expo. The Temple of Human Passions is the only remaining structure built for the Expo in the Parc du Cinquantenaire today.