Theme
Celebration of the centenary of the French revolution

In 1884, French Prime Minister Jules Ferry approved plans for Paris to host its fourth World Expo in 1889, to mark the centenary of the French Revolution. In addition celebrating this anniversary, the Expo aimed to reaffirm France’s stability and the strength of its republican form of government.

Inaugurated by President Sadi Carnot on 6 May 1889, the Expo featured more than 61,000 exhibitors, split between the Champs de Mars, the Trocadero, and, for the first time, the Esplanade des Invalides. Another innovative aspect of the Expo’s organisation was its financing – in addition to the French State and the city of Paris, the private sector also served as a guarantor. The Expo was also remarkable for its architectural splendours based on iron and steel, with the Eiffel Tower being its most recognisable symbol. 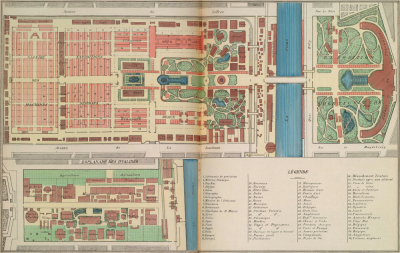 The idea behind the Eiffel Tower arose from the contemporary enthusiasm for wanting to build the highest structure in the world. Across the Atlantic, the organisers of Expo 1876 Philadelphia had planned to build a tower rising up 1,000 feet (around 300 metres), but this project never came to fruition. For Expo 1889, two engineers working for Eiffel & Cie, Émile Nouguier and Maurice Koechlin, devised the plans for a ‘300-metre tower’. The project was then adapted by architect Stephen Sauvestre, who redesigned the overall appearance of the structure before jointly filing for a patent with the owner of the firm, Gustave Eiffel, on 18 September 1884.

On 1 May 1886, the Minister of Trade and Industry Edouard Lockroy launched a contest to study the possibility of building a square-based iron tower, 125 metres across and 300 metres high. Of the 107 projects submitted, Eiffel and Sauvestre’s proposal was a perfect match, and Gustave Eiffel was granted the right to build his tower on 26 May 1886. Using innovative construction techniques, between 150 and 300 workers took two years, two months and five days to assemble the 18,000 components of the Eiffel Tower. The record-breaking structure was completed on 31 March 1889 and the Tower opened to the public on 15 May, going on to receive more than two million visits between then and the closing of the Expo in November.

In addition to the Eiffel Tower, Expo 1889 Paris was a testbed for new forms of architecture, with the Palaces of Fine Arts and Liberal Arts, the Palace of Industry and the Gallery of Machines all being significant and imposing attractions in themselves.

Designed by Jean-Camille Formigé, the Palaces of Fine Art and Liberal Arts were twin buildings surrounding the Eiffel Tower, spanning 200 metres across with a depth of 50 metres. Joseph Bouvard’s Palace of Industry faced the Eiffel Tower on the opposite end of the Champ de Mars, featuring a large central dome leading towards various galleries of industry and machinery. With its metallic structure, the dome drew visitors’ attention with its colourful stained-glass windows, polychrome features and 1,300 gas burners that illuminated the night.

The Gallery of Machines, created by Ferdinand Dutert with Victor Contamin, was the largest metallic structure in Europe, spanning eight hectares and featuring the largest vaults in the world. With its immense self-supporting glass and metal nave, the Gallery of Machines brimmed with innovative machinery, including atmospheric hammers, cigarette-making machines, a Tissot clock-making workshop, phonographs, and telephones. Moving bridges, situated seven metres above the ground, gave visitors the opportunity to travel from one side of the vast building to the other, while a belvedere tower accessible via lift offered impressive views of its contents.

Modernity at the heart of progress

Taking place in the midst of the second industrial revolution, Expo 1889 Paris embodied and showcased the latest technological progress. Architecturally, the use of flat glass and metal marked the beginning of a new era, while steam-powered machinery such as the hydraulic crane and the steam crane were used in the construction of the Eiffel Tower and the Gallery of Machines. Electricity made its mark, with Aristide Bergès presenting the concept of hydroelectricity, known as ‘white coal’, and Thomas Edison – travelling to Europe for the first time – showcasing his incandescent lamp as well as the gramophone.

In the textile industry, new machines drew significant attention and showcased French expertise in the domain, and French seamstress Herminie Cadolle presented her ‘corselet-gorge’ model for woman, the precursor to the modern bra. In terms of transport, Armand Peugeot and Léon Serpollet presented their first steam-powered tricycle – an early version of the car – while the petrol engine was on show via Gottlieb Daimler and Wilhelm Maybach’s ‘Stahlradwagen’.

Decorative arts including ceramics, porcelain, furniture, goldsmithery, and jewellery were also on display at the Expo, with the Art Nouveau style emerging as a predominant trend of the era. Most notably, Émile Gallé received a Grand-Prix for glass, a gold medal for ceramics and a silver medal for furniture, with Louis Majorelle also receiving a silver award.

An Expo for the Republic

Marking the centenary of the French revolution and featuring a reconstruction of the Bastille, many European monarchies declined to participate in the Expo, seeing it as a celebration of republican ideals. Around 30 national pavilions were present, with the United States in particular having a strong participation. In spite of the tensions and due to the importance of the economic stakes, industrial delegations from the United Kingdom, Germany and Italy still attended the Expo.

To encourage visitors from around France, Organisers created special offers combining the train ticket to Paris with an entrance ticket to the Expo. Younger visitors were also catered for, with a dedicated Children’s Pavilion. With growing social consciousness, the Expo featured four pavilions and a gallery dedicated to hygiene, reflecting the growing awareness of the latter. Indeed, all of the Expo’s pavilions highlighted the importance not just of technical progress, but of the social impact of progress and modernity.

The Expo closed its gates on 31 October 1889, having recorded more than 32 million visits.