The Exhibition of 1888 celebrated the urbanisation of Barcelona and its transformation into an industrial, commercial and cultural centre. It was attended by 30 international participants, including popular displays from the US, China and Japan. The Expo was an opportunity for Spain, and notably Catalonia, to showcase its industrial strength, with a focus on technological advancements.

The Expo was located in Parc de la Ciutadella, a newly developed park that replaced a military fortress. The 120x34 metre Palace of Industry was the Expo’s main building and its central hall was host to Spain’s exhibits. The pavilions of international participants and Spain’s regions were located in 24 nearby galleries.

The site also featured the Palace of Fine Arts, the Machine Gallery, the Scientific Palace and the Marine Pavilion. The main entrance to the site was the Arc de Triomf, which remains one of the city’s major symbols. 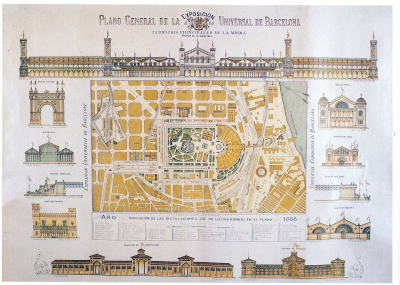 Electric street lighting was for the first time installed on two of Barcelona’s major streets – La Rambla and Gran Via – in order to allow visitors to explore the city at night.

The neo-gothic Castell dels Tres Dragons, which was designed by Lluís Domènech i Montaner as a café-restaurant for the expo, is now the home of Barcelona’s Museum of Zoology. The iconic Columbus Monument was also constructed on the occasion of the Expo to mark the place where Columbus returned from his voyage to the Americas.