Theme
Arts, Manufactures and Agricultural and Industrial Products of all Nations

Official Designation
International Exhibition of Arts, Manufactures and Agricultural and Industrial Products of all Nations

The city of Melbourne, located in the Australian territory of Victoria, hosted a World Exhibition between October 1880 and April 1881. The event, which attracted 1.3 million visitors, was considered a major feat for Victoria, with its Governor stating “It is a source of legitimate pride for the people of Victoria, a colony, a territory that was unknown less than half a century ago. The abundance of natural resources, the wisdom of laws, initiative, intelligence and industry of its people helped to successfully implement this great project.” 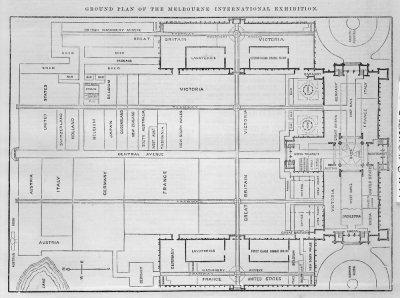 Some 33 countries participated in the Expo, including the United States, Germany and the United Kingdom. Within the Melbourne Exhibition Building, built for the occasion, exhibitors showcased a diverse range of objects including iron and steel products, pharmaceuticals, jewellery, office stationary, pipes, photographs, musical instruments, wine, and samples of natural products from the Pacific Ocean, among others.

The British Pavilion displayed carpets, various chemicals, equipment and leather accessories, while Germany showcased armaments and furniture. The Pavilion of the United States exhibited several innovations including agricultural machinery, typewriters, barbed wire, cotton products, electric lighting and a lawn mower. The prize-winning lawn mower model was reportedly so well designed that it continued to function without needing replaced for 70 years. The Indian Pavilion, in the south-west wing of the main building, was one of the most popular at the Expo.

The Victorian Pavilion demonstrated - in a form of dodecahedron rhombic – the total amount of gold mined in the colony since 1851. Its machinery section displayed locomotives, proving the industrial capabilities of the colony.

Visitors were given the opportunity to discover and experience each country’s culture, norms and specialities. In the different pavilions, for example, they could take a break to try Indian tea, Dutch cocoa or beer from Austria and Germany.

The Melbourne Exhibition Building and the Carlton Gardens that surround it were designed for the Expo by Joseph Reed. The 12,000m2 building, which was made of brick, wood, steel and slate, drew on a range of architectural styles including Byzantine, Romanesque, Lombard and Italian Renaissance. It was built with a 60-metre dome inspired by Florence’s Duomo. The Exhibits were displayed in the splendid Great Hall as well as in several adjoining rooms.

After the Expo, the Exhibition Building was expanded to host the Melbourne Centennial Exhibition in 1888. Later, it was the site of the opening of the first Federal Parliament of Australia in 1901. The building continued to be used for various functions, before undergoing a restoration and being renamed the Royal Exhibition Building in 1988. In 2004, it received UNESCO heritage status.

The Carlton Gardens that surround the Exhibition Building were designed as typical Victorian-era gardens with wide avenues, pathways, ponds and trees from Australia and Europe. The park remains popular to this day, conveying the image of the opulence of the late 19th century.

The Expo was a shot of adrenaline to a city that was already enjoying rapid growth. The event attracted 1.3 million visitors at a time when Australia’s population was only 2.2 million. In the decade following the Expo, Melbourne’s population doubled to half a million, and the success of the Expo justified the decision to hold Australia’s Centennial Exhibition in Melbourne rather than in Sydney, the city’s long-standing rival.

The Exhibition was the opportunity for Melbourne to develop its infrastructure and industry, allowing the city to install electric lights, telephones and lifts and a tramway system. Australia’s international links were significantly boosted, with a direct steamboat line introduced between Australia and the European cities of Marseille and Bremen. The Expo also allowed the colony to establish direct trade relations with Germany, France, Belgium and the United States.