Theme
Arts, Manufactures and Products of the Soil and Mine

Official Designation
Centennial Exhibition of Arts, Manufactures and Products of the Soil and Mine

One objective: present the great potential of America

In 1874, the President of the United States, Ulysses S. Grant, had declared "America should not fall behind in its advance on the path opened by the great European powers. It is to show the whole world what progress could be achieved in a few years by a nation if every citizen works diligently for freedom, prosperity and honour." This call was backed by the Congress that decided to host a World's Fair in Philadelphia in 1876. 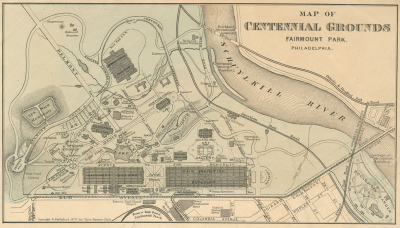 The creation of the Thematic pavilions

The first World Exhibition in America included a significant novelty imagined by the chief planner Hermann Josef Schwarzmann and which has been adopted by all Expos since: for the first time, the exhibits were not to be presented in one single central building, but shown in five exhibition halls according to thematic groups: the Main Hall, the Fine Arts Pavilion, the Machinery Hall, the Horticultural Palace and the Agricultural Hall. To these, were added almost 200 pavilions for the US states, foreign nations and private companies.

Showcase the industrial power of the USA

The USA established itself as one of the leading industrial powers by displaying impressive exhibits and using over one third of the main building, and over 80 per cent of the Engine Hall. The Philadelphia Exposition was also distinguished for its wide use of railway transport.

The key innovations presented in the event

Many technical novelties widely used in following decades such as Alexander Graham Bell’s telephone, Thomas Alva Edison’s telegraph, Remington’s typewriter and Heinz tomato Ketchup, were shown there for the first time to the public.

The material legacy of the Expo

The Fine Arts Pavilion (Memorial Hall) is the Exhibition’s only building still standing today. Immediately after the exhibition, it accomodated the Pennsylvania Museum and it now houses The Please Touch Museum, Philadephia's children museum.