An Expo to showcase the power of the Empire

The Project was not only supported by the political sphere, it was also backed by agricultural and industrial entrepreneurs who saw it as an opportunity to present to the world the results of the recent economic boom. The Empire wanted to establish itself as a cosmopolitan nation and a strong player of international business.

The area chosen as the exhibition ground was a 12-hectare section of the popular Prater park. The original idea for the Exhibition was to create an "international city" with numerous national pavilions. This approach was rejected in favour of a central exposition building for industrial products, machinery and the arts. The main construction, The Industrial Palace, was the architectural highlight of the Expo and its Rotunda was the largest in the world: 83 m high and about 110 m in diameter. 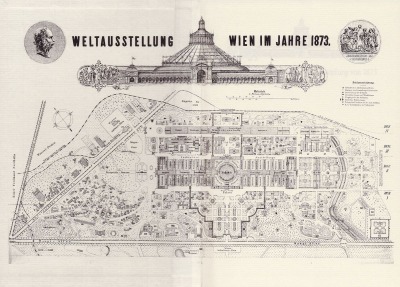 An important part given to education and science

Like in previous Fairs, the mechanical exhibits dominated in all sections. However, according to the press, the most interesting sections were those dedicated to education. One of the innovations of the exhibition was the « History of Prices » section which allowed exhibitors to show the gradual increase of labour productivity and the dependency between public taste and economic development. Vienna 1873 was also the first Expo to offer a site for international forums of scientists: there were 12 congresses and conference held in Vienna during the Expo.

The exposition was used to establish business contacts between industrial nations. Japan, for example who was participating officially to an Expo for the first time, sought a double objective. On the one hand, in the context of the Meiji era, the Japanese delegation in Vienna was to observe and study as many technological and social achievements of Western countries as possible. On the other hand, Japan was to present itself as a commercial and future world power. Instead of presenting traditional Japanese art, the country prefered to diplay contemporary items that could please the European public. The Viennese visitors enjoyed it very much: the "japonism" trend was beginning.

A successful event for the Austro-Hungarian Empire

Despite the natural cataclysms and shocks that happenned during the event (an unforeseen flood of the Danube, a cholera epidemic, the May 1873 stock exchange crash), the Vienna Exposition was a great highlight of the Dual Monarchy and boosted the renovation of Vienna: the Danube channel along with the impressive reconstruction of the old part of the city (the Ring) were the highest success of the municipal building program.