Following the success of the first World Exhibition held in London in 1851, the United Kingdom decided to host a second that would be larger in size and in scale than the original World Exhibition and Expo 1855 in Paris.

The time was considered ideal to host a new Expo to showcase the latest progress that had been achieved in industry, technology and arts. Significant advancements had been made in the area of steel production, steam engines (for railways and ships) and telegraphy, among others. 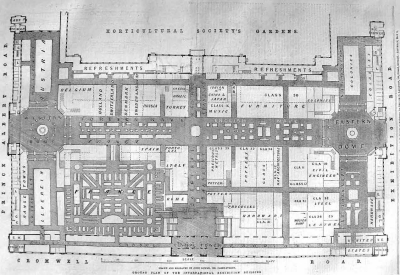 The Exhibition was initially set to be held in 1861, marking the 10th anniversary of the original Great Exhibition, but it was delayed by one year due to international events, including the Italian War of Independence and Civil War in the United States. The latter had an impact on the British textile industry, due to a cotton shortage, with financial issues causing certain international participants to withdraw.

In December 1861, the death of Prince Albert – the husband of Queen Victoria and a leading patron of the Exhibition – came as a blow to organisers. The Queen entered a long period of mourning which prevented her from being present at the opening ceremony.

After the success of the Crystal Palace at Expo 1851, architect Captain Francis Fowke aimed to build an even more impressive and triumphant structure as the site of the Expo, in South Kensington. Designed to be a permanent venue for fairs and exhibitions, the building was made out of iron and brick. Contracted to Kelk and Lucas, construction of the Exhibition Palace, which consisted of a main structure and two adjoining wings dedicated to machinery and agricultural equipment, only took 11 months.

Visitors entered the Exhibition Palace through a long path decorated with large sculptures and columns. The main exhibition hall featured a 350-metre long art gallery that rivalled the length of the Grande Gallerie of the Louvre in Paris. Paintings were arranged according to the nationality of the artist, in accordance with the rules set down by the organisers.

In the annexes, visitors could view machinery and their mechanisms, including the Babbage Difference Engine, a mechanical calculating device. The Bessemer process of steel production was also showcased at the Expo. While only 11 years had passed since the original Great Exhibition, the largest machine on display increased in weight from 9 tonnes in 1851 to 35 tonnes at Expo 1862.

A total of 39 international participants took part in the Exhibition, with their exhibits on show in different parts of the nave. Organisers initially let each country decide on its own architecture and exhibition content, but they later took control back, paying for corrective work when displays were not in keeping with the rest of the Exhibition.

Sponsored by Napoleon III, the French participation included a delegation of workers who exchanged with their British counterparts. This meeting was later used to inspire the founding of the International Workingmen’s Association – the First Internationale – in 1864.

The Expo reached its aim of surpassing two previous exhibitions in terms of size and scale, but it failed to reach its objective of attracting 11 million visitors, with the final tally being 6.1 million.

After the Expo ended, the British Parliament refused the Government’s wish to to buy back the Exhibition Palace. Instead, materials were reused to build Alexandra Palace, an entertainment venue in North London.